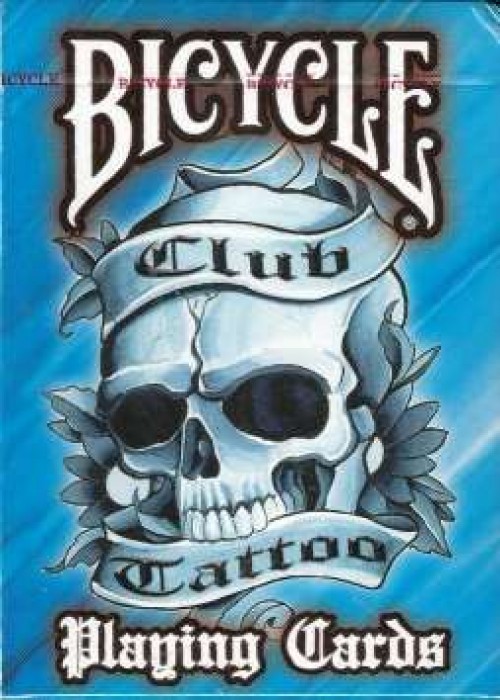 The artists at Club Tattoo, one of the most famous tattoo and body piercing studios in the world, designed the original art on every card in this colorful deck. Club Tattoo founders Sean and Thora Dowdell, and Chester Bennington of Linkin Park, sat down with Club 808 to talk more about the inspiration behind the deck. Each suit has its own style of tattoo art, including skulls, traditional Japanese, Day of the Dead, and traditional tattoos.

Bicycle® Club Tattoo Playing Cards contains original artwork on the front and back of each card and the tuck. Made in the USA at The United States Playing Card Company on premium stock with a quality finish.

Spades: Skulls - The popularity of skull tattoos can probably be traced back to old prison and gang tattoos, because a skull tattoo represents one's mortality. In this suit we included a reaper, a corpse bride, and a skull-headed spade king.

Diamonds: Traditional Japanese - Probably the most popular tattoo style. Classic images like a geisha, samurai, hannya mask, koi, as well as foo dog are represented in this suit.

Clubs: Day of the Dead - Inspired by Mexican celebration of the dead, this is a very popular tattoo style now. We included a Mariachi skeleton, a female made up as a muerto, and a skull adorned with markings as seen on sugar skulls.

Joker: A female face is presented in a style that's popular with Hispanic tattoo artists from the southwest. They are well known for their female designs with clown make-up, done with fine lines of black and gray.