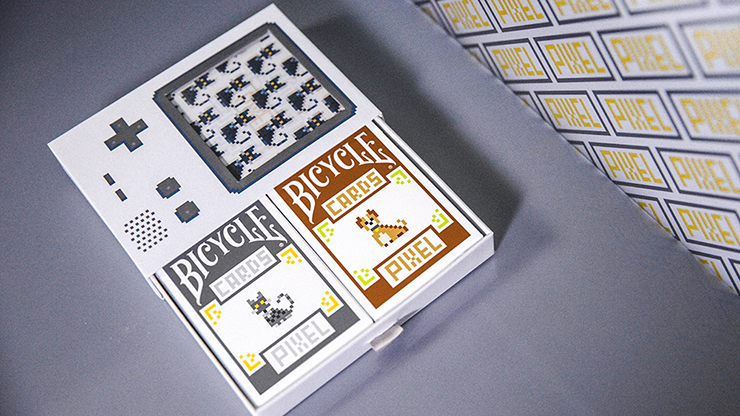 LIMITED EDITION: Only 700 decks printed, and 700 gift boxes! Will NOT be reprinted.

The birth of FC, the first video game console, opened a new era of video games. It has become an indelible memory in many people's minds. We spent 12 months, based on the concept of FC, building the first playing cards collection set - PIXEL V1.

Its creativity and design made this playing card a new favorite in the community. In just half a year, the price of PIXEL V1 rose from $25 to $70, yet many collectors still cannot resist the their love for this deck of cards.

The popularity of FC shows the charm of game cassettes and provides inspiration for Nintendo's second-generation Game Boy. The emergence of the handheld game console brings the game to you anytime, anywhere, and the cassette game has therefore gained further prominence on the scene.

Today, we have made the PIXEL V2 collection set based on Game Boy.

Two hundred million Game Boys have been sold since it came onto the market - it's absolutely the most popular handheld game console in the world. For 15 years, it has dominated in the era of rapid changes in electronic products. In 2003, its production stopped. Tetris, Pokémon, The Legend of Zelda and other games together make up our childhood.

PIXEL V2 is inspired by Game Boy's 30th anniversary and pays a tribute to play and fun once again.

All the PIXELs are sold in a gift box. We went further on PIXEL V1. We used a drawer structure on PIXEL V2 to show the Game Boy's shape as much as possible, and we made improvements so it would be easier to open and close.

On the screen part we used raster design. When the raster is turned up and down, the angle between the eyes and the raster will change. This breaks the boundary between dynamic and static, showing the hidden animation effect. With the help of the raster plate, kitty, puppy and PIXEL images are superimposed on the screen area at the same time, showing a succession of images -- cool and visual.

The design of the suits and numbers abandons the traditional Bicycle style and uses the pixel style as an update. It took nearly a year to try various cartoon elements. Finally, the kitty and puppy were chosen as the design's main elements.

We redesigned all the court cards. Each suit is designed to reflect a popular pet dog and cat.

Two special cards are included. One of them is the King of Spades which has a funny expression on his face. We used the thug life spoof style we used on PIXEL V1. The other one is the self-portrait of Mike with funny dressing.