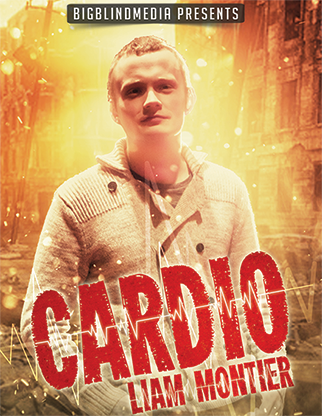 Cardio is something of a 'concept album' - card tricks that are efficient, with a clear end picture, and all using nothing more than a regular deck of cards. No gaffs, gimmicks or shenanigans. Just grab any deck and you're ready to go.

Each of the seven tricks featured is a real 'do-er'. You'll be desperate to get out and fry people with these routines. In Liam Montier's inimitable style, they use simple, clear methods (well within the reach of most card handlers), and are super fun to perform.

Here's Liam to give you a quick breakdown of the tricks you'll be able to learn:

Back Hand Slap - The classic 'Slap' revelation updated and refreshed, as you sneak a spectator's card into their own hand... and then change all their other cards into a royal flush! The idea here was to revitalize something that lots of magicians know and learn early on (the slap revelation) and turbo-charge it, making it a full routine. One simple move set's it all up be-fore your spectator even knows you've started!

Twisted - This starts off with a 'Twisting The Aces' handling that I'm very proud of - there's no displacements or discrepan-cies, and all four turn over clean as a whistle. Then suddenly, the Aces reveal two chosen cards in a VERY unexpected way! It's a more technical routine than some of the others, but the moves are very well covered and justified, so it's a great one to learn to give you confidence with some essential but more challenging moves.

Reality Burp - In terms of sheer effect, this is hard to beat. There's so many changes that happen (a packet of cards ALL change into a selection, and then into a second selection, and then... to KINGS!!!). Then there's a LOVELY moment where they think the two cards under the card box are going to be the selections, but there's ANOTHER back-fire transposition. It's like card-karate!

The Hof - I've experimented with many handlings of the classic 'Hofzinser Ace Trick', but this is the solution I love the most. Framed as a packet trick, it combines simple ideas from Jack Parker and Roy Walton to make a very surprising revelation and transposition. It also makes a perfect trick to do once you have produced four Aces, so you can easily routine this into a set or act.

The Other Thing - This one I've worked on a lot over the years, and I love it! You take a borrowed shuffled deck, and show the four kings spread throughout the deck. Those same Kings immediately appear EVERYWHERE! One you pluck from your pocket, one from the table, one is under the card box and one INSIDE the card case! All with NO PREPARATION AND SIMPLE MOVES! Learn it and I bet you WILL perform it.

Swing of Things - This easy routine employs a necklace as a pendulum and can be played any way you want... serious magic... slightly hippyish weirdness... or lightly (with the TERRIBLE joke I tip!!). Don't overlook it because it doesn't use much technique - the impact and clarity of the end picture really hits hard.

Pop Hoff - A really unusual Hofzinser's Ace variation with a startling visual production and then a kind of reverse Blind Lem-on Aces, where the Aces in your hand suddenly fuse together to make the selection! It's clean, quick and efficient. You will get a lot of fun out of this one!