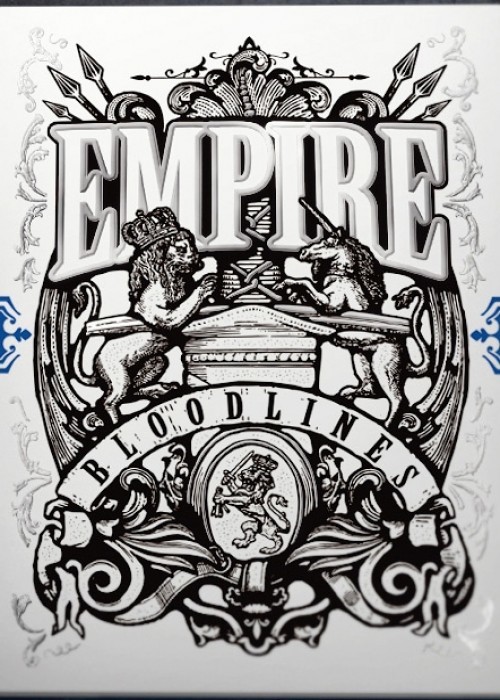 Inspired by a legendary age, where great honor and victory were won on the battlefield. In Royal Blue, the Bloodlines is the latest iconic deck in the Empire Series from Kings & Crooks. Designed by Lee McKenzie, it's a fearless deck that kicks dirt in the face of the playing card norm. It's also the daring successor to our treasured, ultra-rare and highly coveted Empire Playing Cards.

No detail is left untouched. From the epic and ornate engraved-style backs and striking custom-illustrated court cards, to the elegant, completely re-imagined pip design and iconic Ace of Spades. A courageous, custom-illustrated deck with powerful story-telling design guarded edge-to-edge by its pioneering signature Empire band.

Shielded in a velvet-soft, pure white case and adorned with a bold, precision-embossed wrap around design, the box itself is a beauty to behold. Crowned with glistening silver foil accents and a custom closure seal, the Empire Bloodlines is made for those who know that greatness is achieved by choice, not chance.

Printed by the United States Playing Card Co. on FSC-certified, premium quality casino grade stock. They're tough. Lasting. With a superior quality finish for high performance handling combined with a traditional cut, they are the preferred choice for expert card handlers. They'll stand up to a beating better than most.

A commanding blend of beauty and boldness in every card, the Empire Bloodlines tells a story of courage and inspiring greatness. Breath-taking playing cards with a brave mission, they dare you to look within, step out of line, and build your own Empire. It's in your blood.