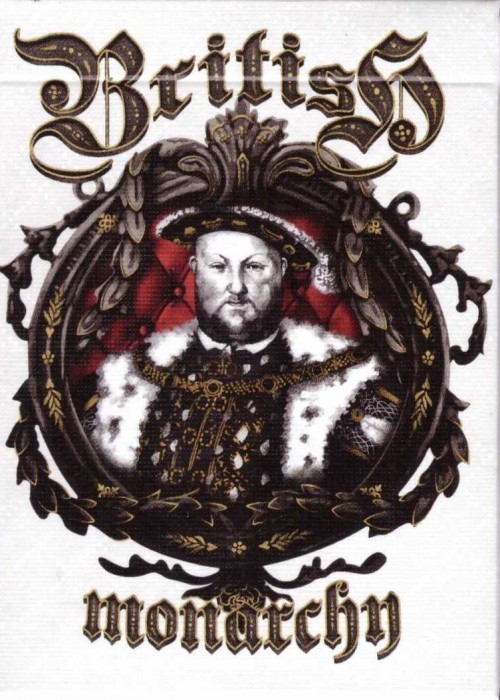 The King Henry VIII tuck showcases a new portrait of Henry VIII, who was the husband of Anne Boleyn (one of our Joker cards) and the father of Queen Elizabeth I (the Queen of Diamonds in this deck). The tuck is intricately detailed with black, gold, white, and a flourish of red to bring everything together.

The inscription on the side of the tuck "Dieu et mon droit" meaning "God and my right" is the motto of the monarch in the United Kingdom. The tuck also features the raised textured finish to give the deck a luxurious feel.

Tally-Ho is the luxury brand of playing cards by USPCC (The United States Playing Card Company). It's the deck of choice for cardists, flourishers, players, and magicians alike. These Tally-Ho playing cards are in the long line of cards that started printing in 1885. This is the latest iteration of Tally-Ho cards, of which there are few. This is the British Monarchy Tally-Ho deck, and you can get it now.

The art is all original and historically accurate, based upon famous British Monarchy from centuries past. To stay in tradition with the elegant Tally-Ho brand, the card back is extravagantly detailed. USPCC approved the art for this deck, and we've been excited to bring it to you ever since. Each King and Queen has been meticulously researched and elaborately portrayed. The card back is ornate in its design, while keeping with the theme of the deck. The back illustrates the Crown, and alludes to the War of the Roses in England. The portraits themselves of the royalty cards are intricate, while keeping the cards playable.

Each royalty card is comprised of monarchy from the long and distinguished history of Britain. The Kings and Queens depicted in each royalty card exude elegance and sophistication. The British Monarchy chosen for this deck include:

The tuck case features some of the most well-known features you are already familiar with on a Tally-Ho case while integrating the new black and gold colors as well as the card back design. The tuck case also features a special raised, textured finish giving the tuck a distinct, rich feel.

This Tally-Ho playing card deck is Made in the USA. The high quality Linoid finish makes it the premier choice among card flourishers. USPCC prints Tally-Ho, Bicycle, and Bee playing cards. Tally-Ho is a registered trademark of the United States Playing Card Company.

Immensely talented artist Nam Tibon is based out of Manila, Philippines, and has been painting since he can remember. He is a Fine Arts graduate of the University of the Philippines, and he won the Golden Laurel Award for the painting competition of the International Delphic Games. His work has also been published at Graphika Manila's art book. He is the co-founder and artist of an indie graphic company, Circus Science, and an artists' collective, Happy Sapiens. At only 25 years old, his work has already been shown in art galleries internationally, and I'm very thrilled that his work can be showcased here.

The History of Tally-Ho playing cards:

Andrew Dougherty was perhaps the greatest innovator in playing card history. He produced some of America's first playing cards, and introduced the first Tally-Ho cards. Among other innovations, he helped bring indices onto playing cards, brought Jokers into mainstream card decks, and also produced cards with rounded corners instead of square corners.