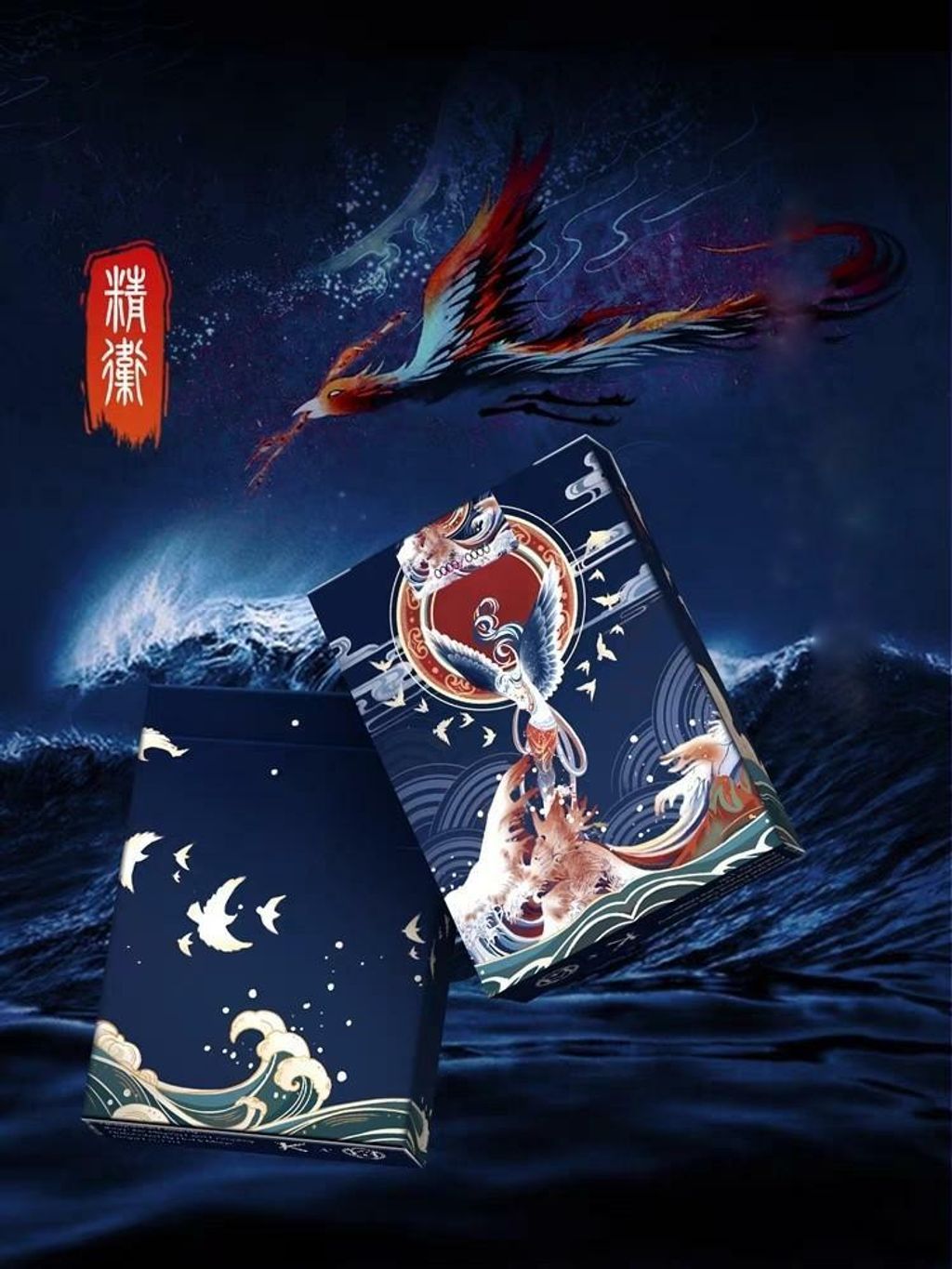 There have been many comments that this is not an "official" King Star deck simply because the King Star logo isn't stamped prominently on the tuck. The backstory is very interesting, so I'll share it with people who are genuine King Star fans. - King Star designed and printed this series specially for the owner of HuiQi Playing Cards, 中哥 (Middle Brother, or an affectionate Sir Middle). This was a gesture of thanks for their working partnership. On the bottom of the tuck, it says very clearly that it's designed by King Star and distributed by HuiQi Playing Cards. - This is similar to Kings Wild Project designing a deck, having it printed by EPCC and distributed by Gambler's Warehouse. Is it still a KWP deck? Of course it is! I am perplexed why people keep saying it's an unofficial deck. - Personally I like that the artwork is not dominated by the Kingstar logo. It's like buying a Louis Vuitton bag, I don't need the logo plastered all over it. Besides, if you have the Cloud / Sea series, particularly the half brick box, you'll recognize King Star's original designs instantly.

Jingwei (Nvwa) According to the ancient work Shan Hai Jing (Classic of the Mountains and Seas), the youngest and most favored daughter of the Sun God was named Nvwa (meaning "little girl"). The Sun God would go to the East Sea to direct the rising of the sun early in the morning every day and he wouldn't return home till sunset. Nvwa eagerly hoped that her father would take her to the sun-rising place at the East Sea for a look. One day, Nvwa was rowing a small boat by herself toward the East Sea sun-rising spot. Unfortunately, a sea storm came and mountain-like waves capsized the small boat. Nvwa lost her life to the merciless sea.

After she died, Nvwa turned into a bird with red claws and a white beak, vowing to fill up the sea. She would hold stones and tree branches with her beak and throw them into the sea, crying the sound of "jingwei, jingwei...", as if encouraging herself. She kept filling up the sea year after year without stop. Later, the story of "Jingwei Filling the Sea" became one of the most important Chinese myths. It's widely considered as a symbol of dogged determination and perseverance in the face of seemingly impossible odds.

The Nine Tailed Fox has been featured in many kdramas lately. In this version, she follows the tale of the Legend of Nine Tails Fox - a 2016 Chinese television series based on six tales in Strange Stories from a Chinese Studio by Pu Songling. Born in peaceful times in Qing Qiu county (literal meaning Green Hills), she resurfaced during auspicious and prosperous times. Please Google if you're interested!

4 Ferocious Beasts which are evil-beings - APART from protectors and god-like creatures, there are also evil-beings in Chinese myths. Si Xiong, or the Four Evils, are one of the most famous.

Each holds evil characteristics such as encouraging greed, distorting truth, and making wars. The evil beasts’ names are still often referred to as metaphors out of superstition.

Some legends suggest the four evils were born from four evil and rebellious tribe leaders after they died in ancient times: San Miao三苗, Huan Dou驩兜, Gong Gong共工 and Gun鲧. They ruled in the reign of the Shun Emperor 舜帝, who was defeated and exiled in the end. But there are many other stories of the origins of the beasts.

Tao Tie 饕餮 Tao Tie is the symbol of greed.   As described in Shan Hai Jing 山海经 (the Classic of Mountains and Seas), Tao Tie features a sheep’s body, tiger’s teeth and human face and hands. Its eyes are hidden under his armpits. It has baby’s voice, yet it eats humans. And in folk stories, Tao Tie eats everything. The monster is so greedy that it even eats its own body. Therefore, the patterns of Tao Tie are often found in ancient cooking vessels, yet only with its head. Tao Tie Shengyan饕餮盛宴, or a feast for Tao Tie, is often used in Chinese to indicate an extraordinarily grand banquet with delicious food.

The monster in Zhang Yimou’s recent movie “The Great Wall” was created based on the legendary Tao Tie. There are also legends suggesting that when the Yellow Emperor beheaded Chi You, his head fell on the earth and became Tao Tie.

Hun Dun 混沌 There are different versions of Hun Dun. The version of Hun Dun in Shen Yi Jing 神异经 (the Classic of Gods and Strange Animals) in the Han Dynasty (206 BC-AD220) is the most common. In this version, Hun Dun is a monster that cannot distinguish right from wrong

Hun Dun shapes like a huge dog. It has bear’s palm yet no claws; it has eyes yet cannot see; it can walk yet cannot move; it has ears but cannot hear. It has a belly yet with no organs such as a heart, liver, spleen, lungs and kidney; it has intestines yet cannot twist. Anything it eats passes through the intestines directly.

It is capable of human emotions, yet it cannot distinguish right from wrong. When encountering noble men, Hun Dun will have conflicts with them; but meeting evil people, it will follow their instructions.

Shan Hai Jing, on the other hand, describes it as a god bird colored red and shaped like a bag. It has six feet, four wings yet no face. It lives in the Tianshan Mountain. It sings and dances. As recorded in Zhuang Zi 庄子 (a book by Taoist philosopher Zhuang Zhou and a student), Hun Dun was the emperor of central China, with no apertures like eyes, nostrils, mouth or ears. He treated the emperors of South Sea and North Sea well at his place. Intending to repay his hospitality, the other two emperors offered to dig seven apertures for Hun Dun. They dug one aperture a day. Yet when all the seven apertures were done, Hun Dun died.

Qiong Qi 穷奇 As recorded in Shan Hai Jing, Qiong Qi looks like a tiger with wings, and always eats humans from the head. It can speak human language. It is good at confusing people’s minds and making wars.

However, there are also versions describing it as a rare animal that eat Gu 蛊 (legendary venomous insects) that harm people. Qiong Qi is often used as a metaphor for those who act in bad faith and defame those who show loyalty. As written in Shi Ji (The Historical Record), there was a bad offspring of emperor Shaohao who behaved badly and resented loyal people. He was called Qiong Qi.

Tao Wu 梼杌 According to Shen Yi Jing, Tao Wu is a tiger-like beast with a tiger’s feet, a man’s face and a pig’s teeth. Its hair is 2-3 meters long and it has a tail more than 315 meters long. It lives in the remote regions in the west.

Tao Wu is often used to label a man who is fierce and stubborn. As recorded in Zuo Zhuan 左传, a commentary on the Spring and Autumn Annals, there was a bad offspring of Zhuan Xu 颛顼 (one of the five great ancient emperors) who could not be taught. He was called Tao Wu.