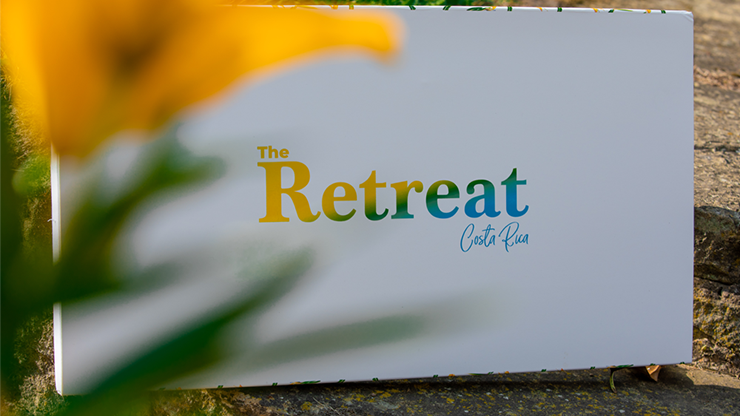 In 2019, forty magicians made their way to Costa Rica for an exclusive, never-to-be-repeated event...The Retreat. This intensive sleight-of-hand getaway featured a limited-edition set of magic NOT available anywhere else...until now. Featuring magic by Dani DaOrtiz, Paul Vigil, Benjamin Earl, Joshua Jay, and Andi Gladwin, only 150 of these sets were ever made and they will never be available again. This set will NEVER be reprinted, and it will never again be offered for sale.

If you weren't at this intensive sleight-of-hand event, the next-best thing is to get a complete run-down of what went on, which is this collection of material. We are offering less than 150 Retreat Pack Sets. These are the same sets given to each attendee of The Retreat. The luxurious custom-designed box has cut-outs for:

Joshua Jay's "Triptych" is a booklet featuring three new, unpublished, impromptu card routines. This is the ONLY place to learn Joshua's newest material, which involves nothing but a deck of cards. You'll learn how to apparently flash-memorize a deck of cards, an impromptu, signed-card version of Guy Hollingworth's "Cassandra Quandary," and "Overclocked," one of the hit tricks of The Retreat, in which a spectator finds four Aces from a deck they shuffle.

Andi Gladwin's "Personal Revelations" is the accumulation of a lifetime's pursuit into the classic effect of Multiple Selection. Andi traces this effect back to its surprising roots, and offers several unique revelations, ideas to routine them together, and an entirely new take on this classic. If you've ever studied this routine, Andi's new booklet is essential reading.

Dani DaOrtiz's "Semi-Automatic" is a terrific new collection detailing the ideas behind a clever card concept Dani often uses that requires no sleight-of-hand. If you're a fan of Dani DaOrtiz, consider this his newest, rarest book. Learn: Oil & Water In The Spectator's Hands, Coincidence Between Two Decks, and Back at the Time.

Paul Vigil's "Icons" is the full coin routine that Paul often uses in his professional work. It's a stunning routine, and extremely hard to find.

Benjamin Earl's "Real Magic" is two essays and two sleights, which together build on Ben's magical worldview. A lovely trip into the psychology of a master sleight-of-hand artist.

Every element of The Retreat Pack fits perfectly into the collector's presentation box, and everything is branded with Costa Rican floral prints, to celebrate the exotic location of The Retreat. When these are sold out, they will NOT be reprinted. So this is your only chance to collect and study this invaluable, rare material.