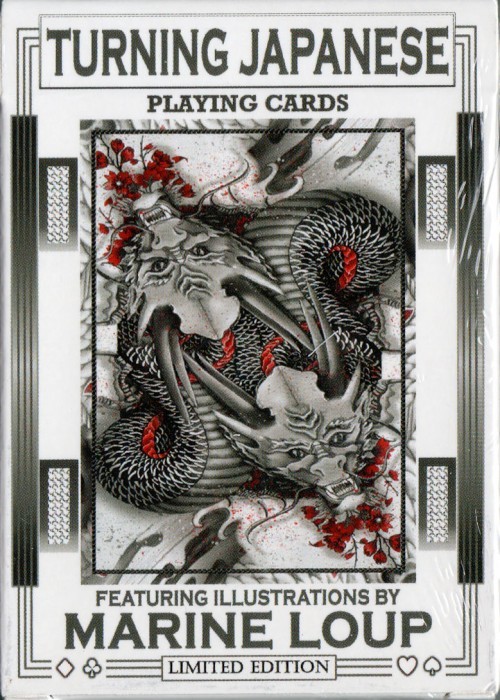 LIMITED EDITION: Only 1000 printed! Will NOT be reprinted.

"From unleashed dragons, samurais and Katana blades, to symbolic koi fish representing an ancient legend, these cards are made to be used, but designed to capture the imagination."

The Limited Edition Turning Japanese Playing Cards contains 60 premium casino-quality playing cards featuring illustrations inspired by Japanese art and culture, including an ancient legend about a group of koi fish swimming upstream... The ancient legend goes on to say that through determination and perseverance, a single koi fish from the group was able to swim upstream to reach the top of a waterfall against all odds, overcoming demons that laughed and mocked at the koi's efforts, and who had also heightened the waterfall out of malice. After reaching the top of the waterfall, the gods, who had witnessed the koi's efforts, turned the koi fish into a golden dragon, the image of power and strength. This deck draws its inspiration from this legend and from illustrator Marine Loup and her Turning Japanese art collection. It is designed to inspire and encourage people to never give up on their goals in life. It also demonstrates that through perseverance and determination, anything is possible.

The Turning Japanese Playing Cards was a limited print run of just 1000 decks, with one random deck containing a gold gilded edge legend of the koi card with golden highlights.

Each deck includes a numbered box seal with an illustration of koi fish swimming in a circle, depicting a yin yang symbol (each seal has 1/1000 printed on it).

Card backings for this deck have been designed to create a Japanese fan from flowers being held inside a dragon's mouth when you fan the cards from left to right.

These decks have been designed and produced to meet the needs of a broad range of card enthusiasts, from the collector to the professional, and are made from a very professional 310gsm casino paper cardstock from France. They have added air pockets that offer better handling and durability that is perfect for card games and/or card magic use.