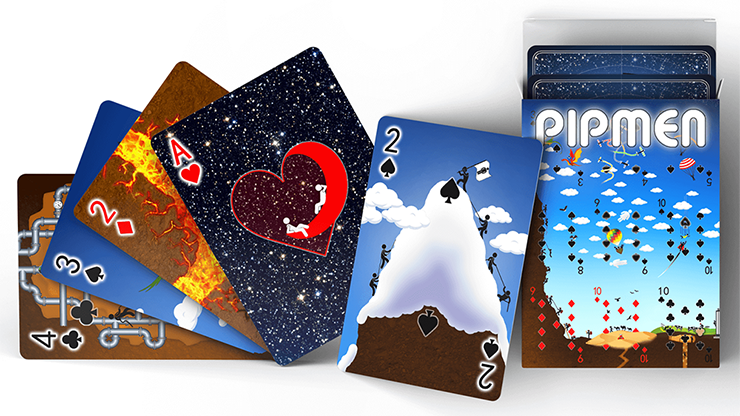 Pips are the suit symbols on the card face - the spade, heart, diamond, or club indicators. In addition to this standard element, each Pipmen card has little stickmen figures interacting with the pips to create a unique scene. So Pipmen are the Pip-men! Get it?

Pipmen cards are fun, quirky, and interesting; but what makes this so unique and awesome is not just the individual cards...

We have made a (very popular) Pipmen deck before, so what sets this project apart from every other deck on the planet? What makes this a totally unique, world-first, revolutionary creation unlike anything else ever?

This deck is absolutely unique because, while every single card is a fun little self-contained scene, they all fit together into one big picture - the Pipmen World!

There have been a few other decks which have had a composite feature, but Pipmen World stands alone. This deck is the first of its kind in the world because:

Every individual card is a self-contained picture.

The face pictures are integral to the symbols on the card face, not just an abstract background pattern.

All the pictures fit together to form a self-contained, single, stunning work of art.

Each card is both an individual picture and a usable playing card. The artwork is fun, creative, and playful.

The cards are so beautiful that they deserve a special tuckbox in which to house them. For the full art version of Pipmen World, we took the global picture and wrapped it around the tuckbox so that you get the full panoramic effect!