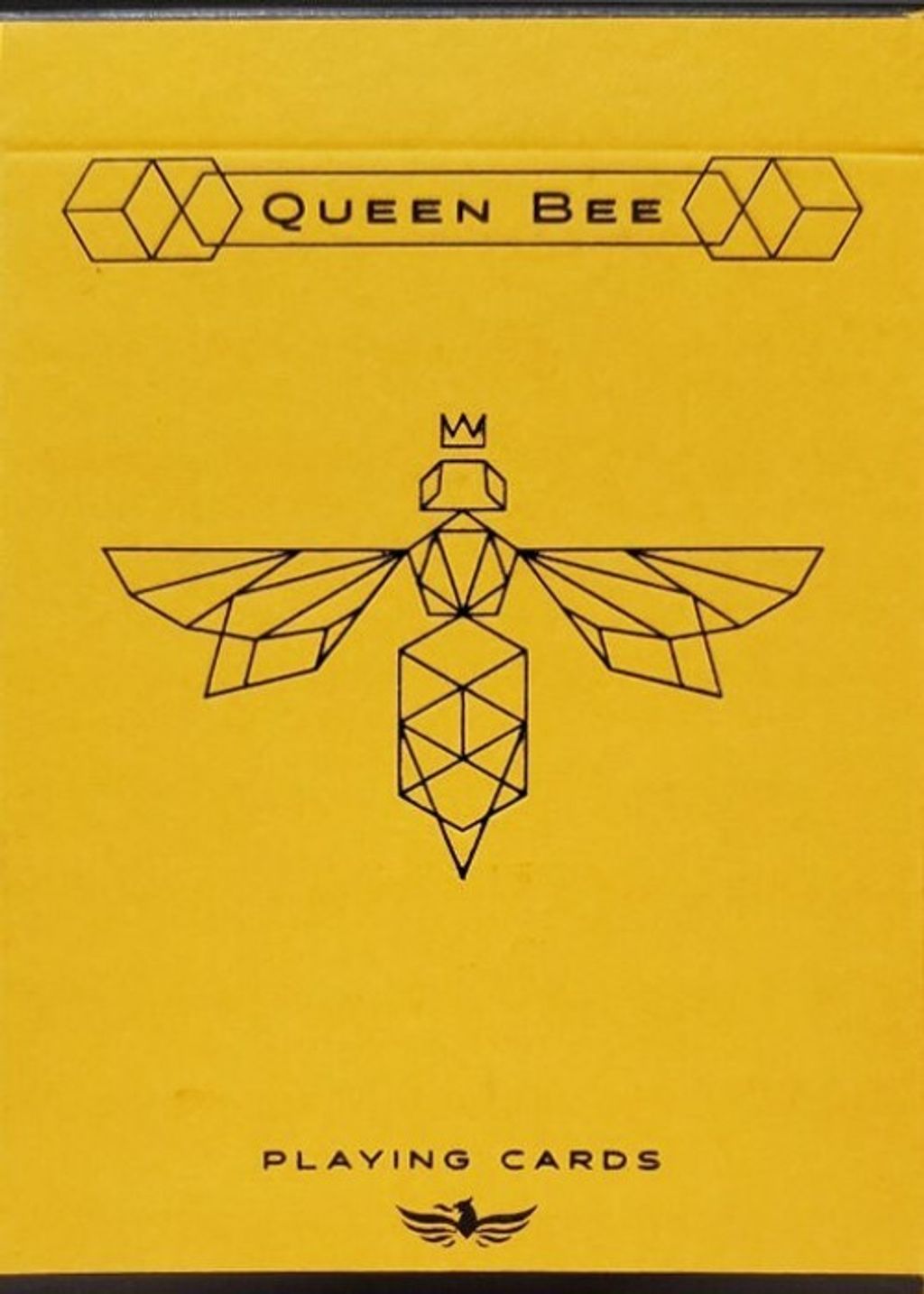 Introducing Her Majesty "The Queen"

The Queen Bee is the matriarch of the hive. Worshipped by the entire colony and fiercely protected.

After making hugely popular Killer Bee and Super Bee designs in the past, we knew there was only one more level that remained unexplored... The revered monarch herself - the Queen Bee.

Unlike our Killer and Super Bee decks, which feature a faint white halo around the deck's edge - Queen Bees have no border. The Queens spill over the edge in their glorious abundance.

The design is a classic of borderless decks, repeating into infinity with bees that fly in opposing directions.

There is but one break in this rule, the yellow bee that stands out in the top left and top right corner. It accents the design and creates a focal point for your eyes.

This little splash of yellow in a sea of black looks stunning in fans and spreads, allowing the minimal design to feel more 3-dimensional.

Each pip is arranged in a completely custom way, with a hidden hive represented in 1 pip of each number card.

This subtle hint is to compliment the Queen's geometric styling.

Inside the Queen's Court

Each court card is custom, with connecting hexagons encasing an effeminate design, like honey trapped within a single cell of the honeycomb.

The lines are thin and sleek but the aura for each court card is instantly recognizable.

Each tuck is custom-made by a print house that specializes in intricate details. We've outsourced this job to ensure that Queen Bees carry a quality that can't be matched by anyone simply producing playing cards on mass.

The tuck-paper is matte yellow and thicker than standard deck cases.

All details on the sides and front are debossed to create texture.

The back of the tuck is foiled in black stripes featuring the life-giving Queen, taken from the Queen of clubs within the deck.

Ellusionist was one of the first major producers to start printing with Cartamundi in Belgium.

During that initial courtship, we asked for only one thing. A slimmer, durable stock to match their already superior printing techniques.

They worked hard to create E7 stock and it was launched with our Blue Cohorts playing cards 2 years ago. The deck credited by many, for switching their allegiance from USPCC to Cartamundi decks.

Queen Bees have this very same stock, the stock we believe is the best for magic, gambling, and card handling in general. Nothing feels better.

Why do we need Bees?

2019 saw the highest loss of Bee colonies ever recorded.

To think that this doesn't affect you is wrong. Honey bees alone pollinate $15 billion of the food we eat in the United States each year. They are vital to our survival.

Aggressive farming techniques and a reliance on devastating pesticides have been decimating the bee population all over the world, causing CCD (colony collapse disorder). Whole hives are annihilated almost instantly.

Our passion for bees has led us to create this Queen Bee project. We hope that this deck of cards can bring widespread awareness to these majestic insects.