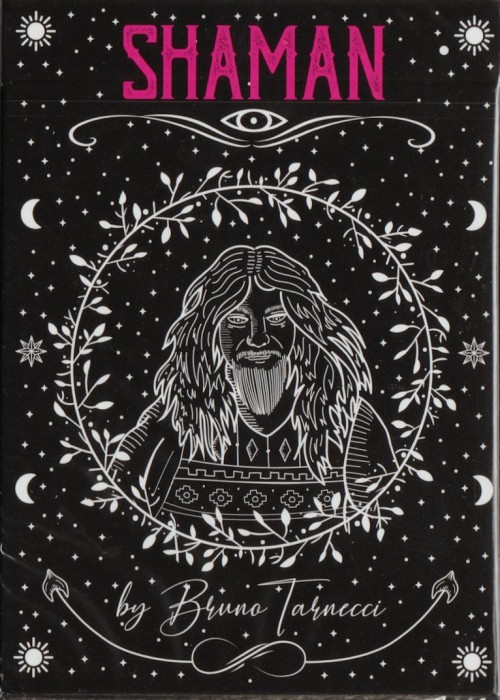 SHAMAN Playing Cards, a new deck by the amazing Bruno Tarnecci, international magician winner of the top magic contests around the world.

The Design:
Inspired in an ancient mythologic symbol, the "CHAKANA," represents the path from the terrenal world "Kay Pacha" to the celestial world where the god lives. This is called "Hanan Pacha." These words are in Quechua, usually called Runasimi (the people's languages). It's an indigenous language spoken by the Quechua peoples, primarily living in the Peruvian Andes and highlands of South America.

The Shaman is a healer who moves into an altered state of consciousness to access a hidden reality in the spirit world for purposes of bringing back healing, power, and information.

The word "Shaman" means "one who sees in the dark" (the hidden realities), and widely refers to those who are medicine women/men, healers, and seers. Shamans believe that all problems -- physical, emotional or mental -- have their root cause in a spiritual imbalance.

A Shaman works to restore balance and wholeness by addressing the root cause of the problem. Many methods are used in shamanic healing. They use the Chakana for this purpose, including soul retrieval, retrieval of a spiritual ally, removal of unwanted energies, soul remembering, ancestral work and hands on healing.

The Back:
The back design of the Shaman Playing Cards is represented by the Chakana ancient symbol surrounded by the four elements, fire, water, earth and air, the Gods of the Sun "Inti", the Mother Earth "Pachamama" and the Moon "Killa". There are two powerful words in "Quechua" (the people's languages) -- "Kay Pacha," the terrenal world of here and now, and "Hanan Pacha," the celestial world where the Gods live. In the center is the Shaman's inner eye, seeking all the wisdom of the past, present and future using the mystic power of the Andean Cross, "The Chakana."

The Shaman indumentary uses a lot of bright and primary colors, but for this luxury touch of the cards we chose only 3 colors: the black that represents wealth, luxury, status, high class; the magenta, a color that has spiritual character, magic, and vitality. It also represents high energy vibrations and emanations, sometimes called the stars of the soul. The last color is the violet with minimal use inside the design that looks awesome. Combined with the black and magenta, this color represents wisdom, magical and mystic powers , creativity and peaceful state of the mind.

Custom Tuck Case:
The Shaman Tuck Case will be printed by the USPCC with their top standard quality. Therefore, if we reach the stretch goal, we will upgrade the deck to be printed in matte premium black paper with soft texture, bringing this deck to the next level.