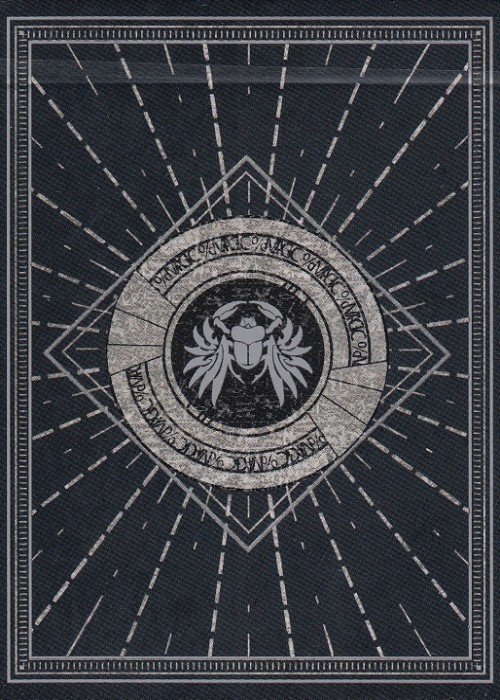 LIMITED EDITION: Only 2,500 printed! Will NOT be reprinted.

Ancient Egypt, a civilization lost to time and the face of mystery itself. And having spanned over 6,000 long years certainly pushed its mysteriousness to its height. The citizens of Old Egypt, if anything, was most pious to their Gods. They believed the Gods' omnipotence will protect their empire. And by this very devotion, they were led to erect one of the world's most famous wonder: The Pyramid.

The Pyramid symbolizes the Gods' power above all. And so its illustrious golden luster is depicted in a playing card that ranked above all - the Ace of Spade. At the card's back winged scarabs make its design. They're a common charm sewn to mummy to protect the dead's passing to Afterlife. On the other hand, the colorless and borderless card's face illustrates Ancient Egypt's creation myth: that the universe began as a lifeless void.

Until the Great Ennead descended from Ra and gifted the world Four Seasons and Nature's Law. Just as the creator of the playing cards had given them Diamond, Club, Spade, and Heart and Playing Cards Standard. It's only because the Pyramid was built can a lost civilization's mystery be unpeeled layer by layer by modern human. And it's only because the Egypt Playing Cards was designed can the same mystery see the light of day again, in a novel way - on a magician's path.

Thus, ultimately, we magicians can make history that belongs to no other on this novel path we walk, with the Old Egypt's conviction inherited through this deck.

If you are a serious card collector, then you must not miss having this mysterious lost civilization in your collection! Get it now from your favorite magic dealer.