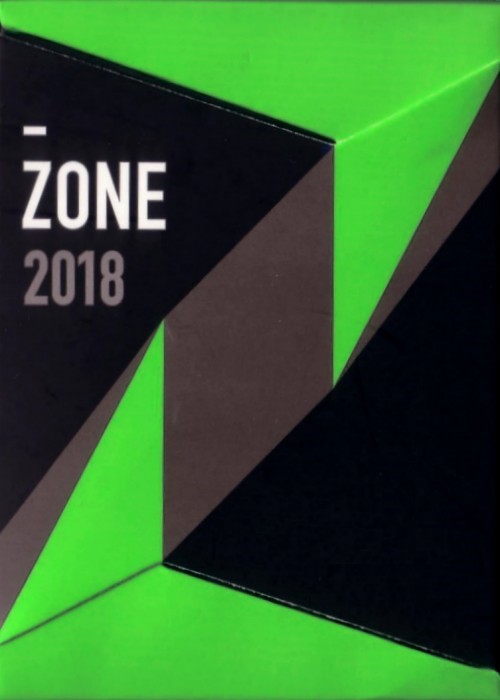 ZONE originally meant "space," which exists both in the actual material world and in the virtual abstract description. Space makes things changeable. Because of the existence of space, things will move and infinite changes and possibilities can be created.

BOCOPO's latest work, ZONE Playing Cards, is a brand-new space in the world of cardistry, which will bring you a different kind of feeling and more novel surprises. At the same time, it is also waiting for your imagination and creation with more amazing changes to it.

Designed for the Art of Cardistry

If you want to choose a color for fashion icons, it must be fluorescent, which is an expression of individuality, bright and dazzling, showing the young sunshine-like personality. If you walk on the street, they must first attract your attention.

ZONE Playing Cards use a bright fluorescent green color, which is particularly eye-catching with the classic black color. It also brings a trendy fashion sense to this deck of cards, making it difficult for you to divert attention. Among the cards with pure color or pattern, the existence of ZONE Playing Cards will become a symbol of fashion and personality in the cardistry community.

The Future of Cardistry - Creating Possibilities

As another chic design, the ZONE Playing Cards box design uses an unprecedented two-way open box. The special box-opening method makes the shape of the whole box fuller and more three-dimensional, with the angular appearance setting against the bright color. Thus, you can find its uniqueness and personality at the first sight.

In addition to the eye-catching look, ZONE Playing Cards is also a new idea and concept: In the world of cardistry, can you play more than just cards? How about card boxes? This is not only the beginning of the two-way open box, but also a new world of card box design, which is also waiting for you to join!

The back design of ZONE Playing Cards looks very simple at first glance, as if they have only lines and geometric patterns, but they are carefully designed. The rules of mathematics have been used in the composition of the designer's line.

The back of the card will form a unique pattern in the movements such as the cards' exhibition and their rotation. The dynamic visual effect, whether in cutting or exhibiting, can perfectly display the beauty of rhythm. Just like a fingertip gyro, it will catch your eyes and keep you away from troubles and stresses.

In ZONE Playing Cards, from the number cards, to the head cards, to the Jokers, no pattern is created by curves, but instead composed of straight lines and geometric cuts, which are sharp and clear. Just like the personality of a young person, with sharpness but never compromising.

The number cards were modified on the basis of the original pattern, allowing the rounded curve to return to a young state: sharp edges and corners. Whether it is a Heart or a Club, it has its own edges and attitudes.

Like the overall style of this deck, the Court cards also avoid the traditional card face. Without detailed depiction, it only draws a rough figure with lines and color blocks, looking similar with different characters respectively. Just like a youth, you may have a similar age or shape, but you are unique indeed.

As a crucial card in a deck of cards, the Ace of Spades has been naturally designed to have the most distinctive style: a diamond. Like an inverted diamond, each edge and corner of the Ace of Spades has been engraved by the sharp blade, which means that the young pride will not be dimmed by the tempering of life. We will live just like diamonds, with thousands of sculpting and carving, but still shining.

About the recent trendy elements, ribbons are indispensable, which symbolize a kind of coolness with casual style, adding dynamic in the tough quality. Thus, it has been added to the Jokers, one cool black and the other fluorescent green, with mixture of low-key and publicity.